Charleston, my Charleston, is a city whose past is so intertwined with the history of America that her streets, monuments and buildings are a living museum to anybody who visits her. Whether you are a history buff or not, you can’t help to be intrigued and mesmerized by the fact that you are walking down an alley where George Washington once strolled, or perhaps as you admire the architecture of that building on the corner the realization that it was built by first generation sons and daughters of the American Revolution. Or perhaps, as you carefully tip toe across the cobbled stone alleyway you begin to feel the gravity that these stones were used as ballast and were eventually offloaded from ships that came across the Atlantic Ocean hundreds of years ago to a new world, a beautiful and lovely new world. 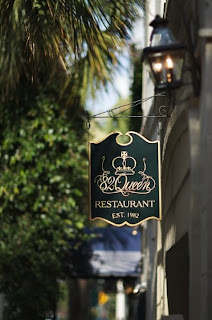 Today, From The Land of Palm Trees continues with our series on Charleston Restaurant Week by visiting a dining room with a history as rich and intriguing as the charming and romantic city where it is located. If you can, click here to follow a link to the 82 Queen website and spend some time scrolling down through the "ABOUT" section of the site where you will discover that the history of the address, 82 Queen, which just happens to be the name of the restaurant as well, goes back to the late 1600’s when the property was granted to a Barbadian immigrant who built a home and slave quarters on the piece of property that resided within the original walled city of Charlestowne. You will also marvel, I think, that the property has seen earthquakes, fires, and hurricanes and through the nearly four-hundred years has been home to stores, leather shops, and restaurants and that for the past 30 years its current tenant, 82 Queen has racked up awards and recognition from Southern Living and Wine Spectator to name but a couple.

But this evening, she is mine all mine as we make our way into Charleston’s French Quarter to 82 Queen for a 3 for $30.00 night on the town courtesy of Charleston Restaurant Week. The 82 Queen CRW menu poses a bit of a dilemma for this diner, too many choices. But after much deliberation and consternation I arrived at a clear cut choice for my dinner at 82 Queen. For my appetizer I am choosing Pickled Okra Fries with a tasty Carolina Remoulade. I really went back and forth considering the Fried Green Tomatoes served with Country Ham, Cheddar Grits and a Red Pepper Chutney, but in the end what can I say, I love me some okra. Besides, like any true strategist I was planning my next move and I felt like the okra dish would serve as a better prelude to the main event, Chicken and Waffles made with fried chicken on a sweet potato and bacon cornbread waffle smothered in a pecan bourbon reduction. Woooooeeee!!!

Now for desert, the folks at 82 Queen are making this one a mystery to CRW diners, the posted menu just simply reads; Your Server will have tonight’s selection. The optimist in me is hoping for a desert that I have made several times at home because the recipe appears in one of my favorite cookbooks, Charleston Receipts Repeats and combines two of my favorite tastes, strawberry and banana in the 82 Queen Strawberry and Banana Pie. The pie uses a tasty graham cracker crust and is filled with a filling consisting of cream cheese, powdered sugar, walnuts, bananas, strawberries, and cool whip. Yummo!!! But I am sure no matter what the server offers, it will be decadent and southern. Just like the address, 82 Queen.

Don’t forget the great giveaway we are providing for the rest of January. You could win a one-year subscription to AZALEA Magazine just by commenting on this post at the bottom of the post or by choosing to follow From The Land of Palm Trees on Twitter (Doug@landofpalmtrees). AZALEA is a great magazine that captures the charm and essence of life in a small southern town. Don’t miss out on the opportunity. To visit AZALEA click the link to the right of this post near the top of From The Land of Palm Trees.
Posted by Doug at 3:56 PM

Comment and Enter To Win A One-Year Subscription to AZALEA 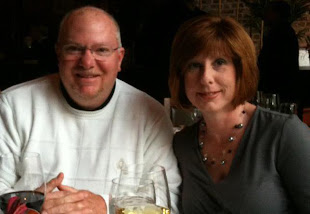 Doug
A transplant from West Virginia living the dream in the Lowcountry of South Carolina. Married with two sons, wife teaches 1st grade. Graduate of West Virginia University School Of Pharmacy. Currently practicing as a hospital pharmacist. Blessed by God Always, better than I deserve.

My desire for this blog is that it be about having faith and trusting your dreams. Our journey to the "Land of Palm Trees" had it's origins in the beautiful mountains of my home state of West Virginia. While God had blessed me with being born and raised up in a great WV family full of heritage and pride, and a wonderful childhood in those mountains, the South Carolina Coast had been calling out to me for years. Finally with the help of my wife and the encouragement of my two sons, I had the faith to take the leap "into my dreams" in 2007. Thus, the purpose of this blog is to chronicle for those with a pioneer spirit what life is about in The Lowcountry of South Carolina, at least for our family. We live in what many of our friends and family call "vacation land" and because of that, I think I can blog about every day occurrences and it will be interesting and enjoyable for you to read. This blog is a work in progress and is an eclectic mix of food, fun, history, GOLF and other stuff that might in some way serve as motivation for you to follow your dreams as well.